Rainbow Plant Food - How It's Made

How Rainbow Plant Food is Made 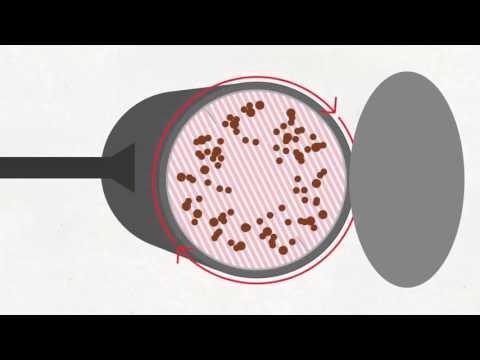 All the Nutrients Your Plants Need, in One Granule

For optimal crop yields and quality, basic NPK is not enough. Depending on the soil in your region your plants could face serious deficiencies in primary, secondary and micronutrients. That's why we created Rainbow plant food - to ensure your plants get the balanced nutrition they need from each uniform granule.

How do you know if your plants are deficient in nutrients? The symptoms can be difficult to spot. Click on each nutrient to learn how to spot nutrient deficiencies in your plants.

Phosphorus deficiency is difficult to diagnose because abnormalities, such as a purple leaf color, don't show up until the deficiency is severe. Mild cases may actually darken the green leaf color due to a surplus of nitrogen. Other symptoms include slow growth and delayed maturity, poor tillering and low seed yields.

Sulphur deficiency symptoms usually begin in new growth because sulfur is not easily translocated in the plant. Look for general chlorosis of leaves, stunted growth and low seed yields. Sulfur deficiency in canola may also cause low oil content in seeds and produce deformed cup shaped leaves that take on a reddish-bronze coloring.

As one of the primary nutrients, nitrogen is vital to the health of your plants. Symptoms of nitrogen deficiency include general chlorosis (leaves are pale, yellow, or yellow-white) of older leaves, stunted growth and low protein content in foliage or seeds.

Potassium is highly mobile in plants so deficiencies appear on old growth first. Look for general chlorosis intensifying to scorched edges and interveinal areas of the older leaves. Other symptoms include poor stem strength which may lead to lodging and low bushel weight of cereals due to shriveled seeds.

Chloride deficiency in cereals is sometimes manifested as "physiological leaf spot" which resembles a tan spot. Other symptoms may include wilting followed by chlorosis (leaves are pale, yellow, or yellow-white), bronzing of leaves, yield loss and greater disease incidence.

Visible symptoms of Boron deficiency are not common, however symptoms may appear on new growth - as Boron is immobile in plants. Leaves and stems may thicken and become brittle while forages and canola may have reddish or bronze discoloration or yellow mottling. Also, look for poor fertilization and seed or fruit set, poor growth or death of terminal buds and shortened internodes.

Manganese deficiency is most common in soils with high pH or organic matter. Manganese is an immobile nutrient so symptoms appear first on new leaves. In cereals, the new leaves become chlorotic, creating a striped leaf effect. Gray specks may occur in cereals. Broadleaf crops show some mottling or interveinal chlorosis similar to iron deficiency.

Symptoms of iron deficiency are not common in most field crops but may occur in high ph/calcareous soils. Iron deficiency is exhibited as distinct interveinal chlorosis of the upper leaves. Veins remain green with light green, yellow, or even whitish interveinal tissue. Iron deficient plants are generally spindly and stunted.

Symptoms of zinc deficiency commonly appear as stunted plants with shortened internodes and small leaves. Severe deficiency can result in "rosetting" of terminal leaves. Also look for interveinal chlorosis and/or mottling of leaves and delayed maturity. Zinc deficiency is most common in high pH soils, soils with low zinc levels, and soils with high phosphorus levels.

You Can See the Difference

There are two basic types of dry granular fertilizers: blended and ammoniated.

Materials supplying nitrogen, phosphate, potash, secondary nutrients and micronutrients are chemically combined into one solid granule. The granules’ size, shape, and density are closely controlled so that each granule has consistent percentages of each nutrient.

A blend is made by mixing together two or more fertilizer materials. Particles of nitrogen, phosphate, potash, limestone filler, and occasionally small amounts of secondary nutrients and micronutrients are mixed together.

Farming technology is constantly improving and so is Rainbow Plant Food. Each grade is reviewed annually. Formulations are altered as needed to meet the changing nutritional needs arising from increased yields, new crop varieties, and modified farming practices. Rainbow Plant Food formulations are tailor made, based on thousands of soil samples taken from area farms. Our end goal? Your bottom line.

Through an elaborate four-step process, we chemically fuse precise amounts of primary, secondary, and micronutrients to form multi-vitamin granules. Every granule is a complete package of nutrients that are uniform in size, shape, and weight, so they spread evenly to maximize distribution. These granules also deliver the proper nutrient amount within the all-important root zone. Rainbow gives your crops just the right amount of nutrients needed to thrive and bring you strong returns.

Though totally unique, Rainbow Plant Food begins just like every other fertilizer – as piles of dry and pulverized nutrients. Before the granulation process begins, computers weigh out exact portions of minerals such as nitrogen, phosphorus, and potassium to ensure that every granule contains an equivalent amount.

With the help of liquid ammonia to serve as the glue that binds nutrients together, weighed dry raw materials are mixed together in a tank called the “ammoniator.” The resulting chemical reactions and heat cause dry salts to convert to a liquid phase, which harden again in the pellet shape of granules.

Once these nutrient-packed granules are ready to hit the shelves, Rainbow technicians step in to test the products to make sure each and every one is up to snuff. These technicians are regularly sampling our granules to check for quality, and consistency. The result: a product that’s second to none, time after time.

Products Designed to Meet Your Needs

No two growers are alike, and over the years, Rainbow Plant Food has evolved into a family of three distinct brands to meet the needs of our diverse customer base:

Nutritional benefits that meet your crops needs. Rainbow boasts the same four basic minerals as our International product, and adds other nutrients such as boron, manganese and zinc to promote fuller and more vibrant crops. Started as a premium plant food for cotton in 1925, today this product is perfect for just about every crop, including cotton, corn, tobacco, soybeans, and more.

Going premium pays. Super Rainbow offers you optimal nutritional benefits through additional nutrients such as magnesium, sulfur, and calcium to facilitate exceptional yields and higher grades. This product line also boasts additional micronutrients including copper, iron, and boron – all of which act as catalysts to activate enzyme systems and maximize plant health and crop quality. These kinds of inputs will lead you to exceptional yields, higher grades and maximum profits.

Formulated to give an even distribution of N, P and K. International is produced to specifically meet your economic needs, as well as your crops’ nutritional requirements. It is a reliable cost-effective alternative to physically mixed materials. Granules of this product contain a standard amount of nitrogen, phosphorus, potassium, and sulfur – the four essential ingredients for above-average yields.